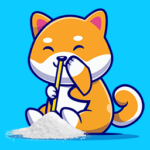 Get the HIGHEST with CokeDoge.
Rewarding holders 18% returns in BNB.

CokeDoge has been on a streak of selling which allows him to reward his holders by automatically airdropping them BNB at a rate of 18%, which is the highest amount around. Auto deposits into your wallet every 4 hours!

Our CokeDoge doesn’t like people selling his coke. If he finds out someone is trying to sell, he will tax them 24% as punishment. On the other hand he loves it when you buy from him, so he has cut that tax in half to 12% on buys. So go ahead and sell, you’ll regret it later.