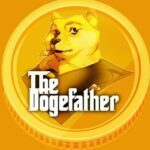 Solid long-term project. Currently listed on Pancake Swap, BKEX Exchange. Additional exchange listings coming later this year.
Over 76K holders. Over 19K members of our Telegram group!
Price listings on Coinbase, Coin Gecko, Poocoin, Coin Market Cap, CoinBase, Dextools, Blockfolio, Bulltools, and Bogged Finance
Listed on over a dozen coin voting sites – leader on Rival.Finance, promoted on coinchamp.cc
We have a Tesla giveaway program – depositing Dogefather tokens gets you a Tesla giveaway entry
Airdrops coming in August!
We have already had billboards in Times Square New York and Leicester Square London. We have a revamped White Paper which has been thoroughly thought out. We have a charity based NFT marketplace in Beta as well as the Dogefather swap. We also have a foundation store where you can purchase Dogefather merchandise to help support the project and a portion of the proceeds go to a charity fund. Our tokenomics speak for themselves.
We have a live community, voice chat open frequently to anyone. Come ask us anything about the project, or anything about crypto or anything about life in general. Also visit the website. Which we are constantly improving.
Donations to charitable causes helping humans as well as animals!
Tokenomics:
10% Transaction tax
5% to Liquidity Pool
5% to Token Holders (including Burn Wallet)
Circulating supply: 337.41 Trillion and burning!! 🔥🔥🔥
Marketcap: $1.16 million currently
Previous ATH: Over $40 Million marketcap
Liquidity:  locked
Dev ownership renounced
Safe and audited (Techrate)
Migration to v2 in Pancake Swap schedule to happen after 04/28/2021
4.1 95 votes
Coin Rating